As part of OPerA Studio’s 2018 exhibition “OPerAtive Representation,” we created a set of collages to further examine an increasingly common project type among new developments in Brooklyn: expanding existing townhouses into multi-unit apartment buildings. These projects redefine the Brooklyn townhouse typology by adding bulk to the top, rear and sides of the buildings to convert one and two-family homes into six or eight unit dwellings. Each site has excess development rights, often allowing for a doubling in floor area. Therefore, entire townhouse neighborhoods are in the process of being dramatically altered to accommodate increasing housing needs. The advantage of this incremental, interstitial mode of development (rather than a raze and rebuild strategy) is that it allows for aspects of the neighborhood character to remain – notably the historic facades. Developers prefer to create these new apartment buildings as alterations in order to speed the approval and construction process and save costs. This set of conditions creates an interesting design problem, as building context that is seemingly complete and finite needs to be augmented. Over multiple projects, we’ve taken a variety of approaches to study the compositional potential of these additions. In the collage study, we took a common site – an anonymous townhouse façade – silkscreened onto a plywood board. Then, drawing inspiration from projects, both successful and abandoned, created a series of relief models. The concept of collage – as an “assemblage or occurrence of diverse elements placed in unlikely juxtaposition,” comes across both at the scale of the relief models as well as the buildings eventually constructed, contrasting the existing neighborhood fabric. Our mission as architects and designers is “Breaking the Diagram” that has resulted from current zoning codes and market conditions in Brooklyn, so that we can accommodate the increased need for housing while maintaining pleasant urban conditions and neighborhood character.

The following case studies discuss a selection of Brooklyn Typology “collage” projects by OPerA Studio that are completed or under construction: 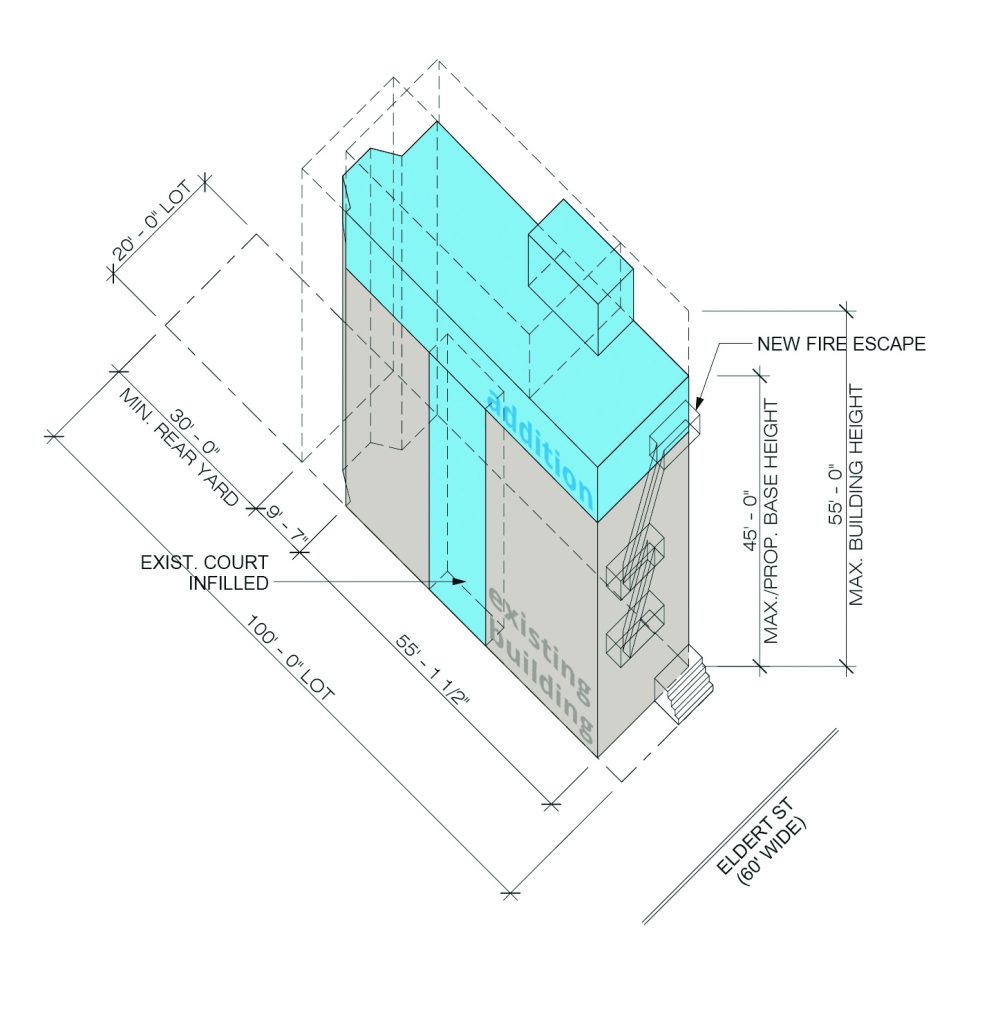 This one story addition had to be squeezed in between the existing cornice and the maximum street wall height. To get adequate light into the top floor and to accommodate fire escape access, the new top was conceived as a modernized mansard in the same lead coated copper material as the cornice. The dormer windows cut into the cornice and merge the old with the new, creating new architectural details in the process. 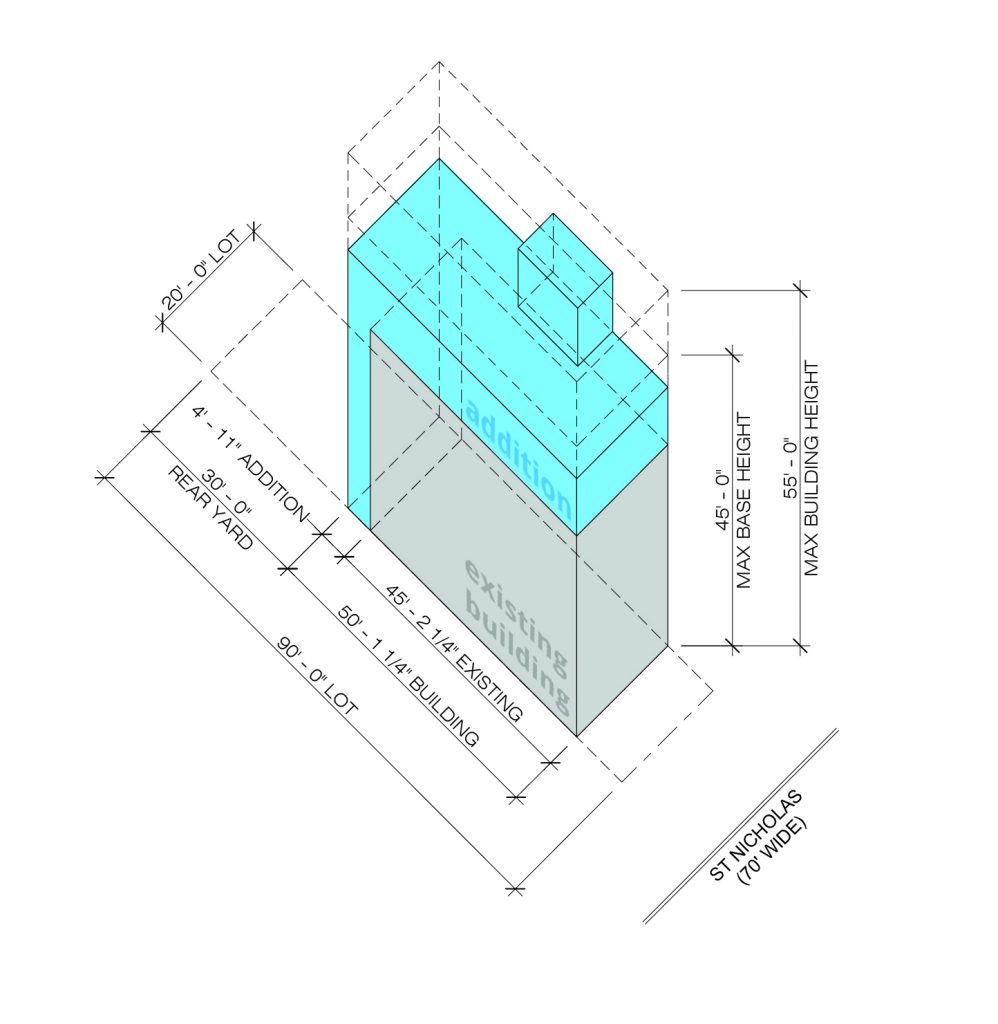 Another take on the mansard typology, this zinc-clad additional floor articulates itself as an added story with an expressive angular vocabulary of deep dormer windows. The stoop had to be eliminated in the process of providing handicap access, so we created a ‘ghost stoop,’ a balcony and screen that mimic the profile of the original. 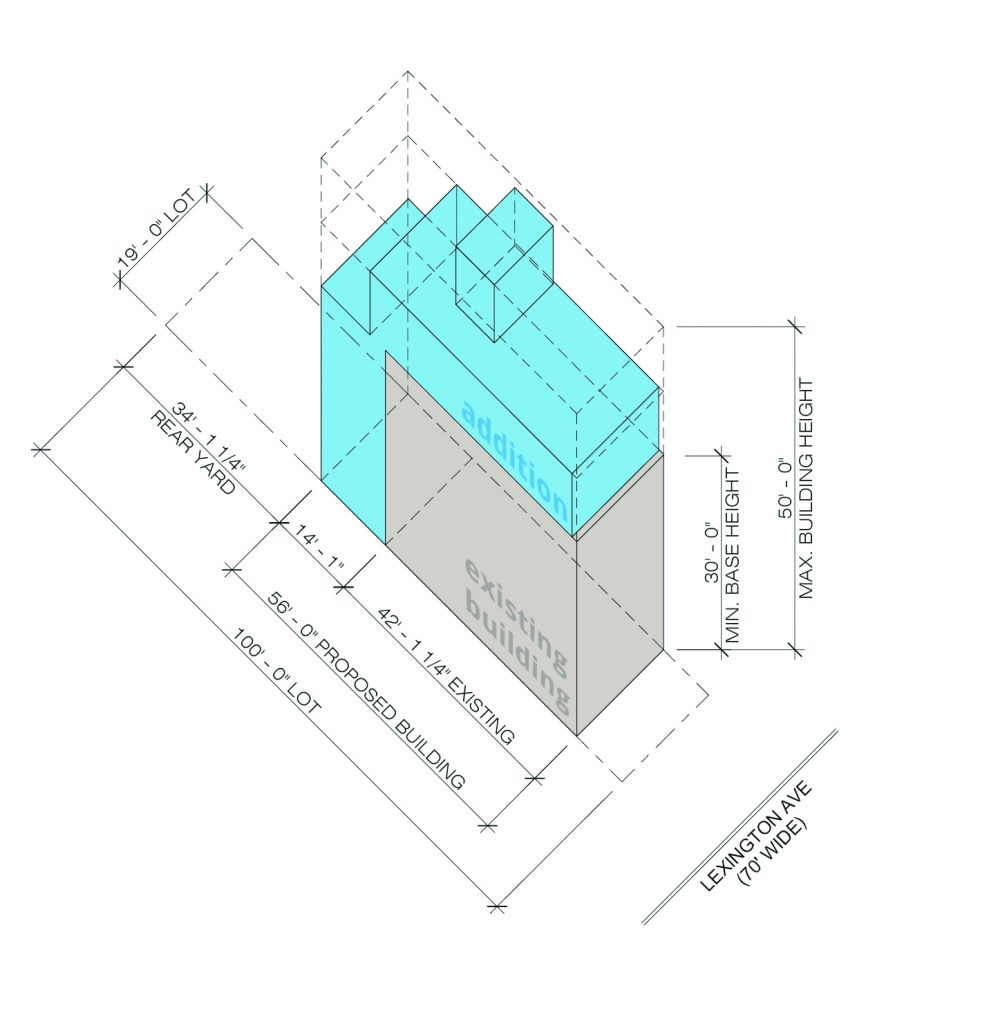 The apotheosis of the mansard approach, this top takes aspects of the attic story concept (light construction, metallic materials, receding volume) and translates it into a modernist vocabulary with attenuated lines and perforated materials. The rhythm of the cornice brackets is reflected in the window mullions, which extend to become railing posts for the roof terrace. 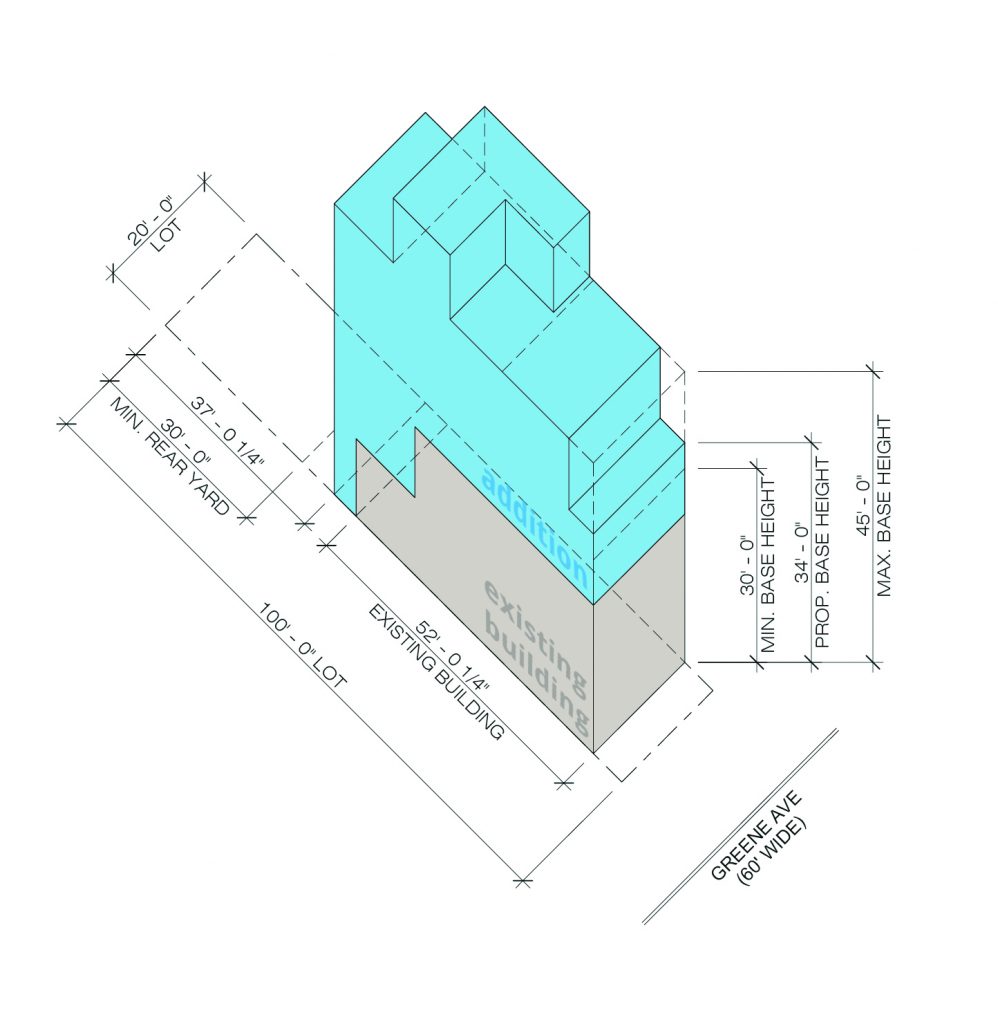 The two story addition doubles the volume of the existing townhouse below. The upper half is treated as permeable volume in contrast to the lower brick portion. A slatted screen covers the new third floor, and provides operable sunshading for a terrace at the added fourth floor. 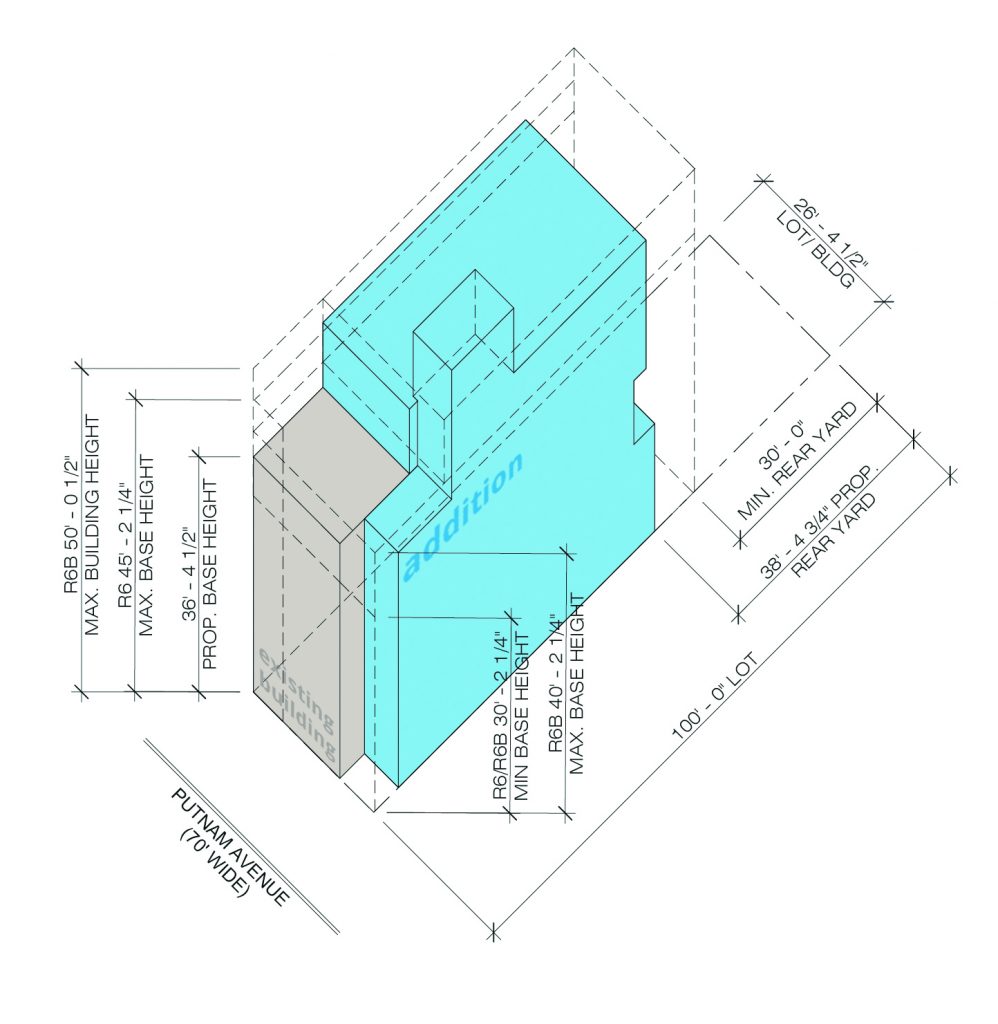 The 26 ft wide site contained a side yard that was infilled as part of the overall expansion of the building. This provided an opportunity to create an expressive vertical entrance and circulation core in a style complementary to the existing townhouse. A sliver of modernity wedged into old Brooklyn. 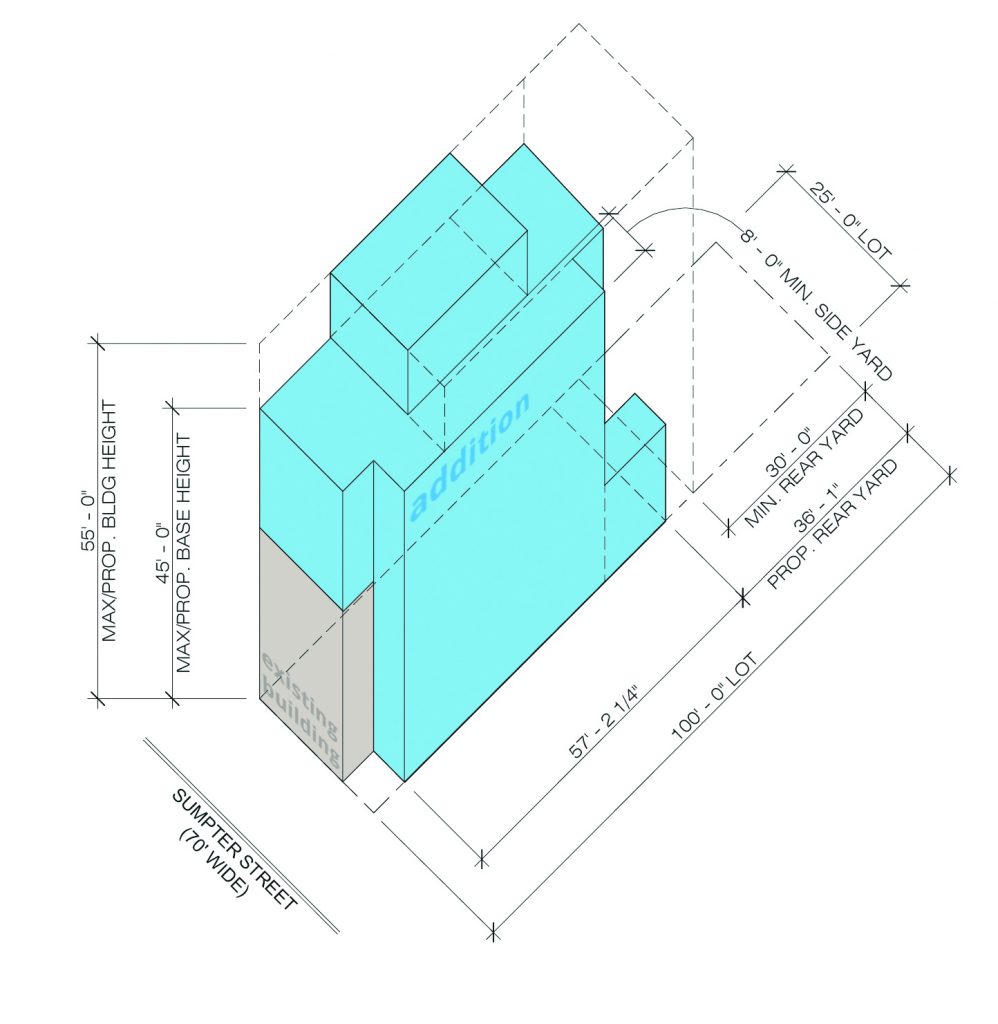 A two story addition on top of an unremarkable two story townhouse, the strategy here was to create a new screen façade surface to bind both parts together and veil the transition. 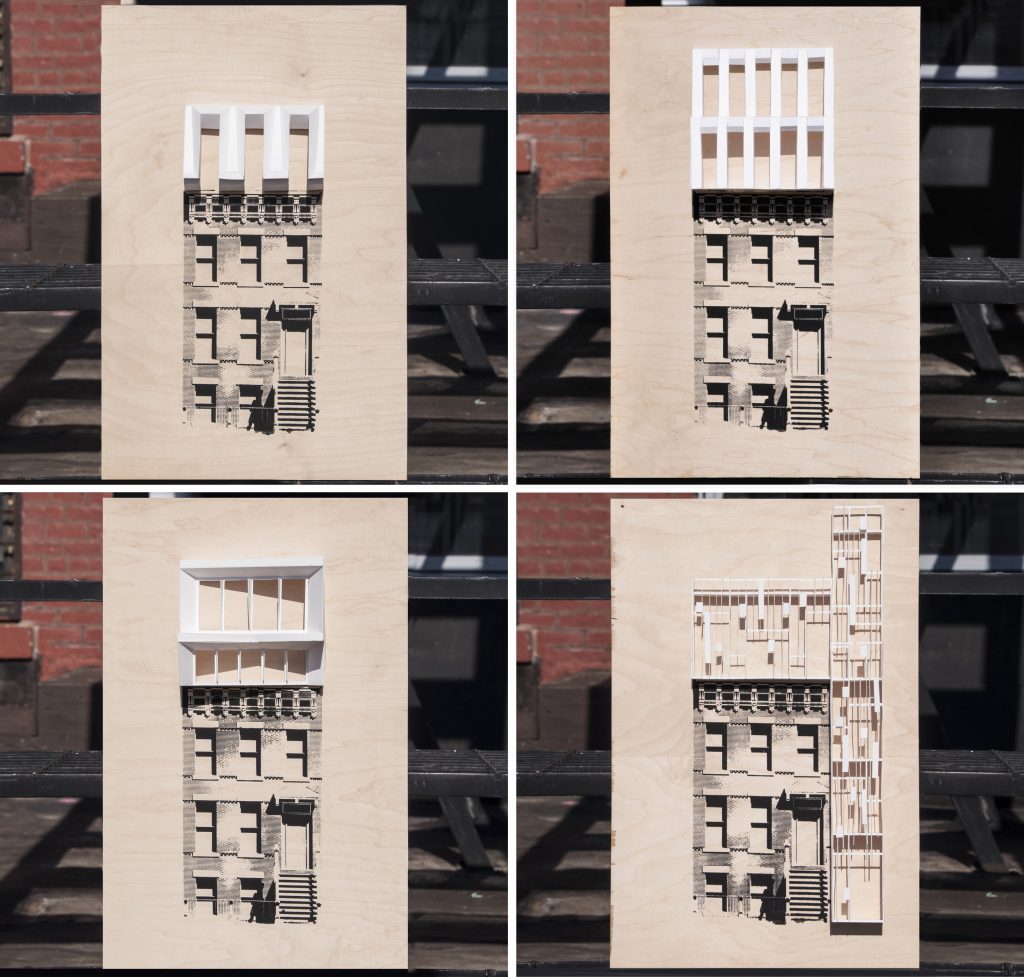 “It is suggested that a collage approach, an approach in which objects are conscripted or seduced from out of their context, is – at the present day – the only way of dealing with the ultimate problems of (…) utopia and tradition; and the provenance of the architectural  objects introduced into the social collage need not be a great consequence.”

Architectural critics have examined the collage approach to city planning and design in the past, such as Colin Rowe and Fred Koetter in their book Collage City published in 1978 (quoted above). The authors characterized the sensibilities of “architect as an aesthetic mediator of competing architectural styles,” rather than someone who imposes a utopian vision. At the time, they were motivated by the failure of post-war modernist housing developments, which were seen as creating cityscapes lacking in character or livable space.

As architects living and working in present-day New York City, we have observed the results of new development in areas of Brooklyn that have recently gone through zoning changes designed to increase the local building stock. Over time, the developmental tension between high maximum floor to area ratios vs. small existing lots yields a scenario wherein sites are combined, and the buildings which previously occupied them are systematically demolished to create large apartment blocks bearing no resemblance to the pre-existing context. They produce urban environments which are every bit as stultifying as housing projects from the postwar period. By identifying certain formal and spatial devices that operate independently of aesthetics, we can be better equipped to design pleasant urban conditions while accommodating the need for increased housing stock. Some of these devices are porosity, scale, texture, rhythm and identity. The case studies outlined above are one example of how this is possible.