The kiosk, who we have named Tiffany, began as a thought, a conversation about geometric principles; the current state of our country’s educational system and children’s interest in architecture. It then evolved into a discussion about where we are now as a profession in the eyes of the public and the notion of the “starchitect”. With the public overlooking the fact that we are – like doctors and lawyers – everywhere as part of your community and that 85% of all architects practice in small firms and operate as fiduciaries for their clients. Through the ambiguity and suggestive nature of design, we as a trade have allowed people to forget the benefits of our service, of good design, by self-perpetuating the image of the “starchitect.”

It was the aim of this “kiosk” submission to reintroduce people to architecture, to create anew the perception of our trade in the eyes of children who explore and occupy the space, the parents who take them there, and the professionals who work out of it. Through physical interaction with the “kiosk” and its scale models, people of all ages can explore various iterations and levels of transformation possible with the newly created form. Through mere physical exploration and examination of an object and its built system, knowledge could be gained. Allowing an individual’s perception of good design to be altered for the better, teaching on a 1:1 basis what our trade is about.

To enhance this concept and further invoke the interests of inhabitants, while supporting the functions of professionals who use it, we allowed the form, and its generating system, to experience a constant state of evolution. The ability to change periodically and transform throughout the day, week, month, or seasons will visually remind people of the “kiosk’s” presence. While peaking curiosity and enhancing frequency of visitation of by-passers. Hopefully, by steadily increasing the amount of people it can effect throughout its lifetime and aid in changing the public’s perception of architecture. 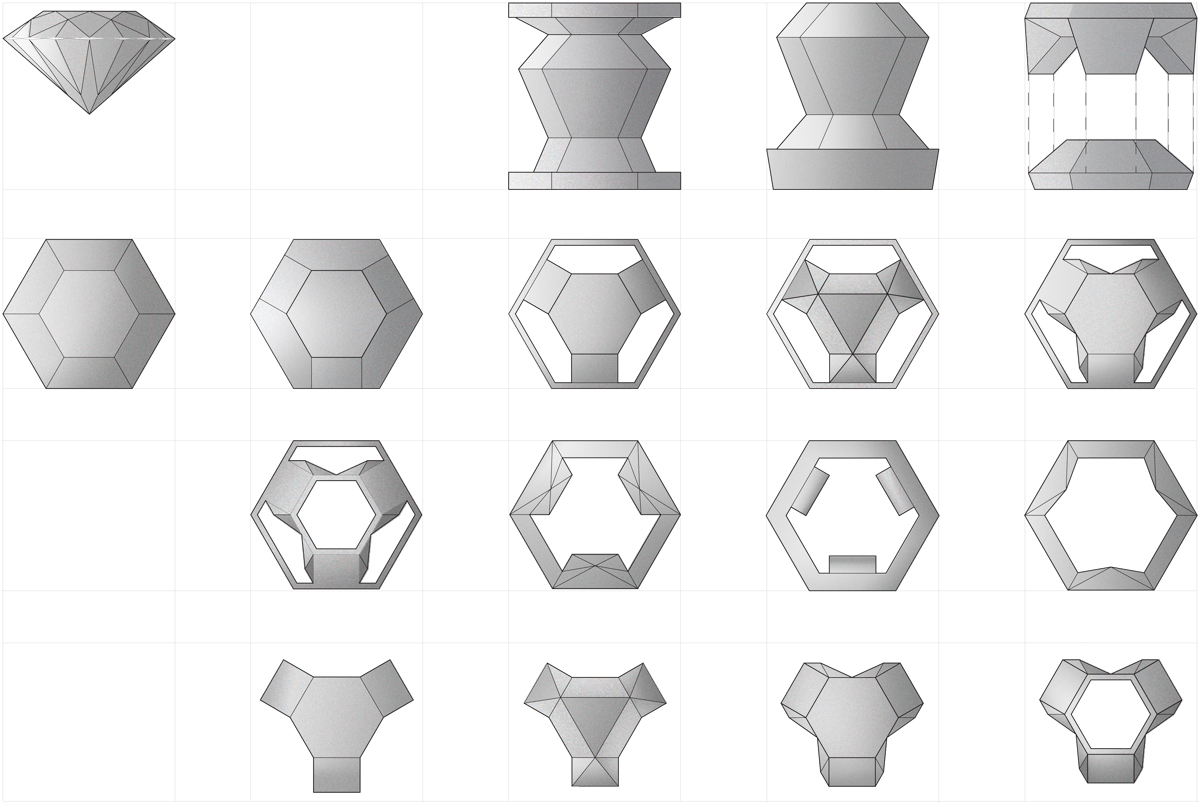 The generative process for the “kiosk” started as a series of analytic studies of Platonic Solid’s, the forms they make and resulting cross-sections those forms create. In the end, it was the spatial and numerical qualities found in the Dodecahedron, and it’s cross-section at vertices the hexagon, which won out as the starting point for our generative process. From that, and the Dodecahedron’s 2D net, the iterative process began to intermingle and communicate with the ideological goal we set forth.

After studying the form through digital and analog mediums three core components were determined. We then examined the afore achieved components by comparing their spatial qualities to the programmatic needs of the kiosk, and its inhabitants, over the seasons. Afterward, it was redesigned based on inconsistencies found, and materials were included into the equation. Material application was then applied and explored throughout the form, cross-checked with the ideological goal set forth and the utilitarian nature we hoped to achieve. Ultimately, we simplified everything found so that people of all age groups could interact with the “kiosk” and understand it through fundamental interaction. 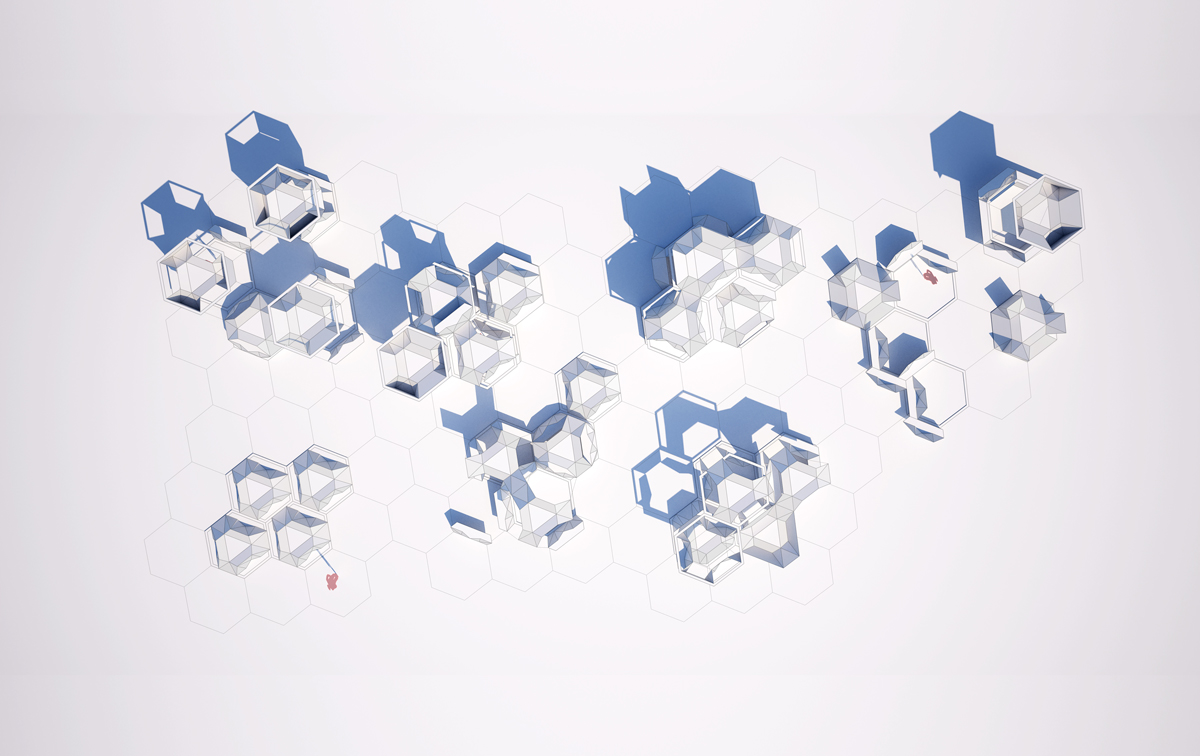 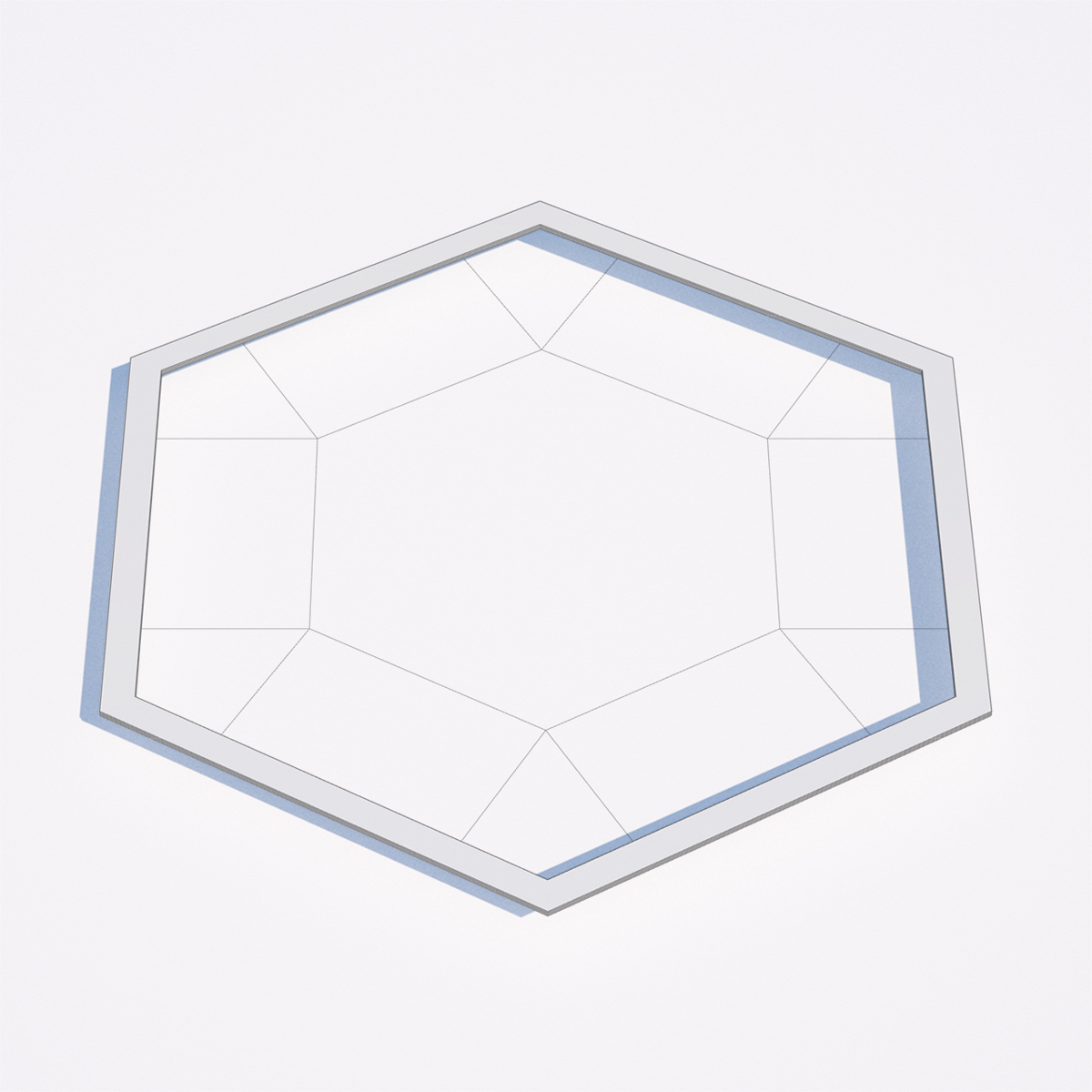 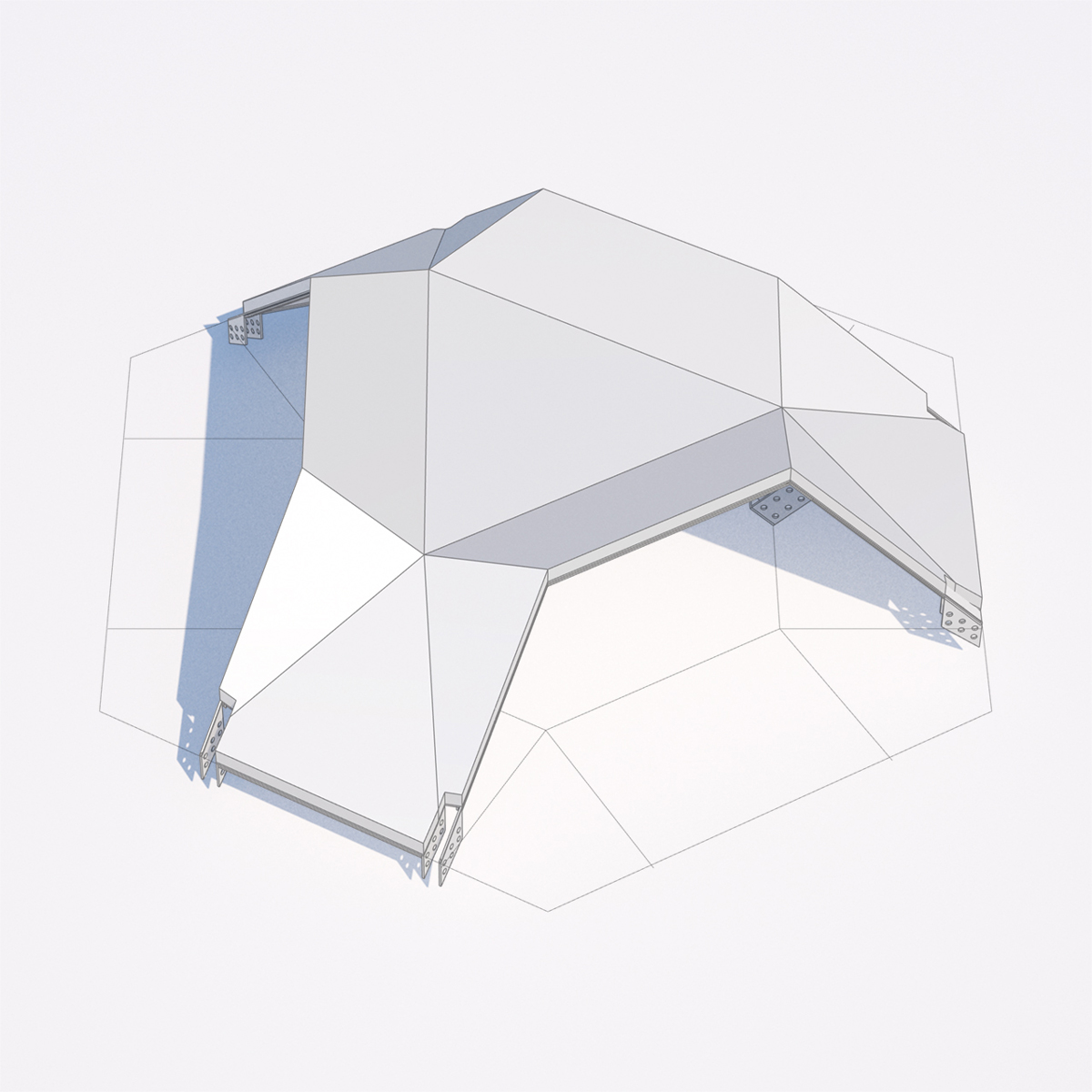 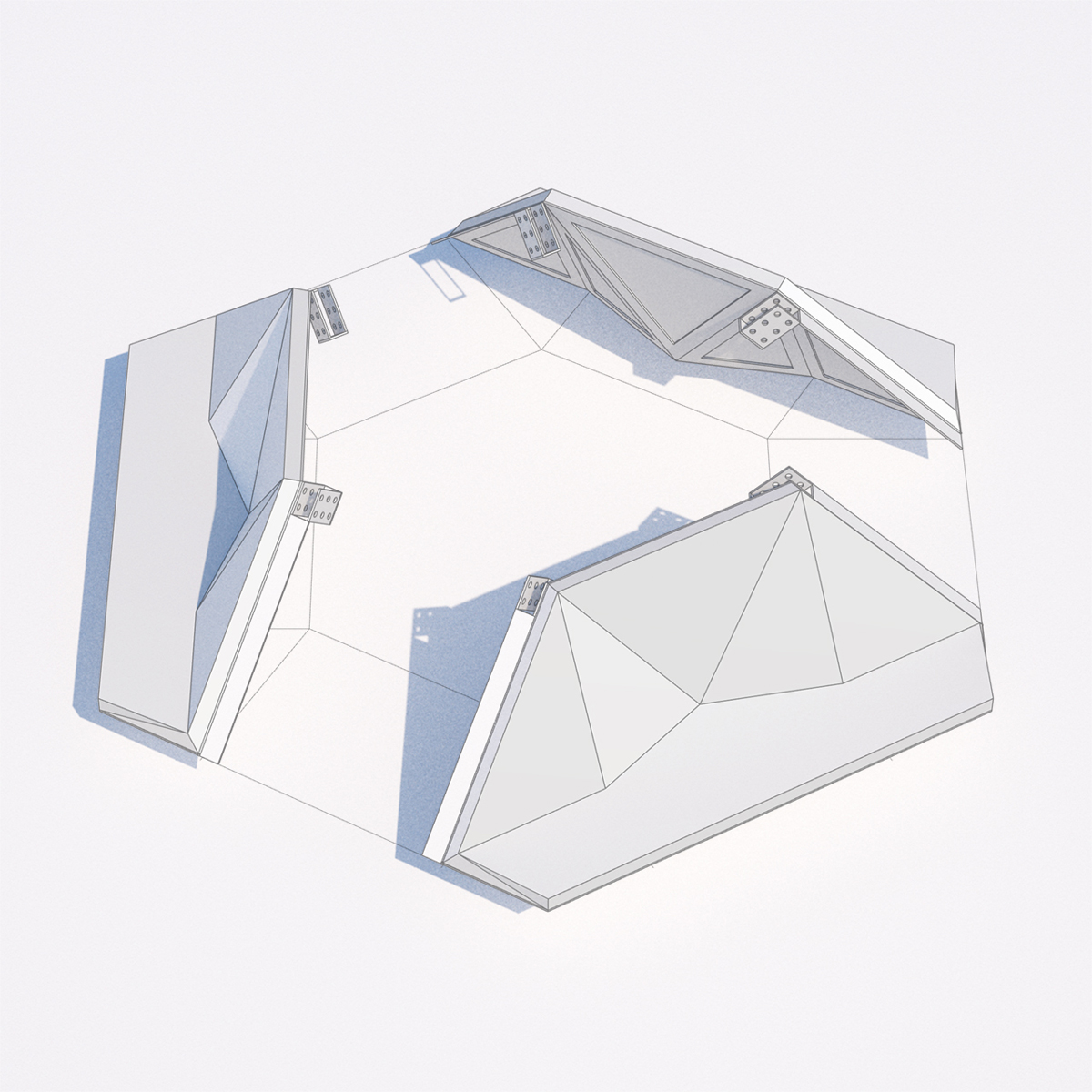 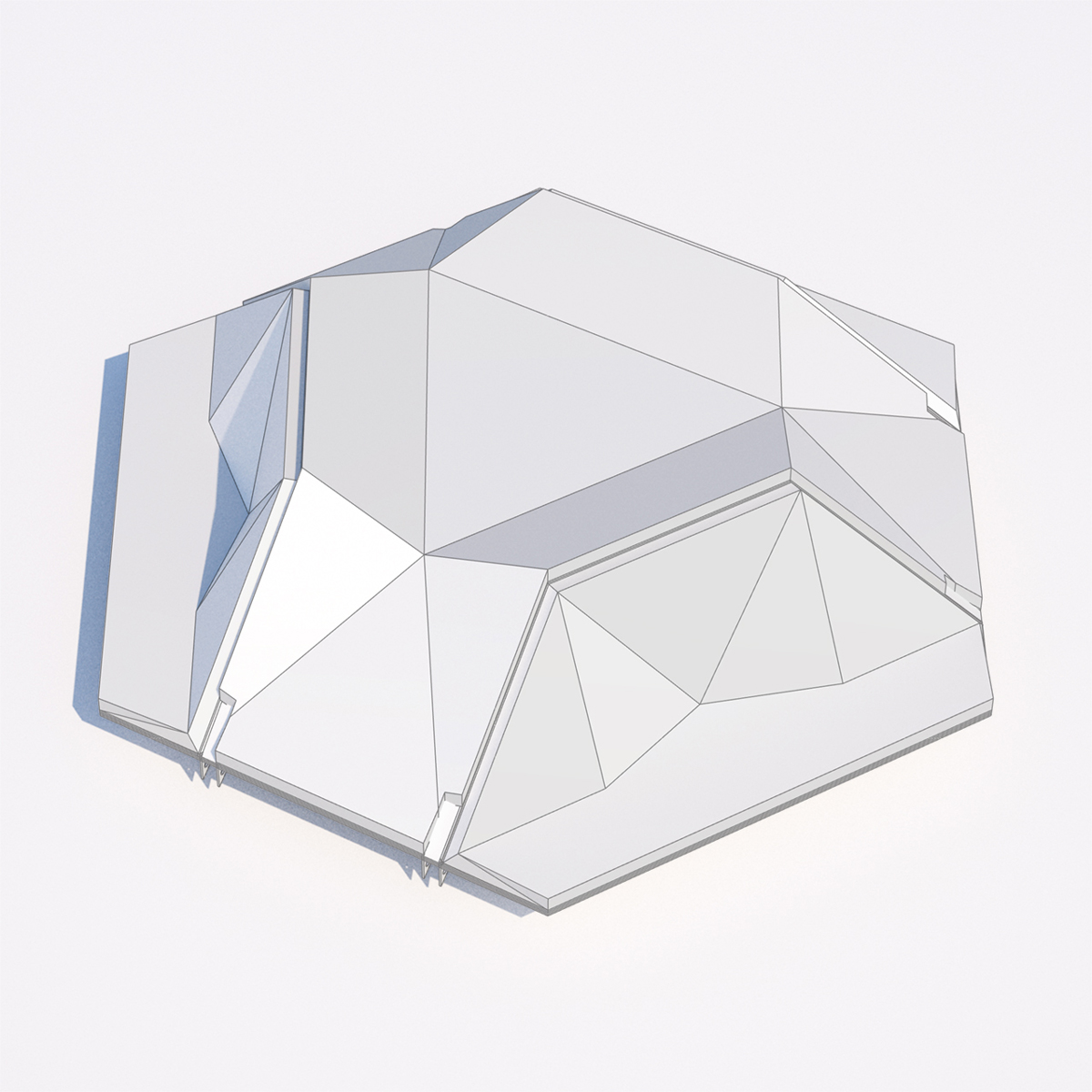 The three essential components are the Ring, which supports and defines the structure, the Seating Component, which relates to the human scale, and the Roof Component, which provides functional services. The simple construction of these elements allows the “kiosk” to hold a frame like form with material application added to it. Each component can clip, lock, and interact with each other in various ways, allowing each new participant their unique path of spatial discovery when interacting with the “kiosk,” while suggesting that at the root of architecture and form are governing principles that support our desire for space. The three components also enable the “kiosk” to have interchangeable parts that can swap in and out to provide advertising and display support for the vendors; elements which can also be replaced or repaired, depending on the climate or needs of its current owner, allowing the “kiosk” to grow, replicate, and expand based on the inherent impact over time, ideally turning the Chicago Waterfront, and the Biennale, into a landscape of booths we can interact with and that offer more than just a monetary value to the community they support. As knowledge of a topic and profession spread and evolve, so too does the “kiosk” of the Chicago Biennale. 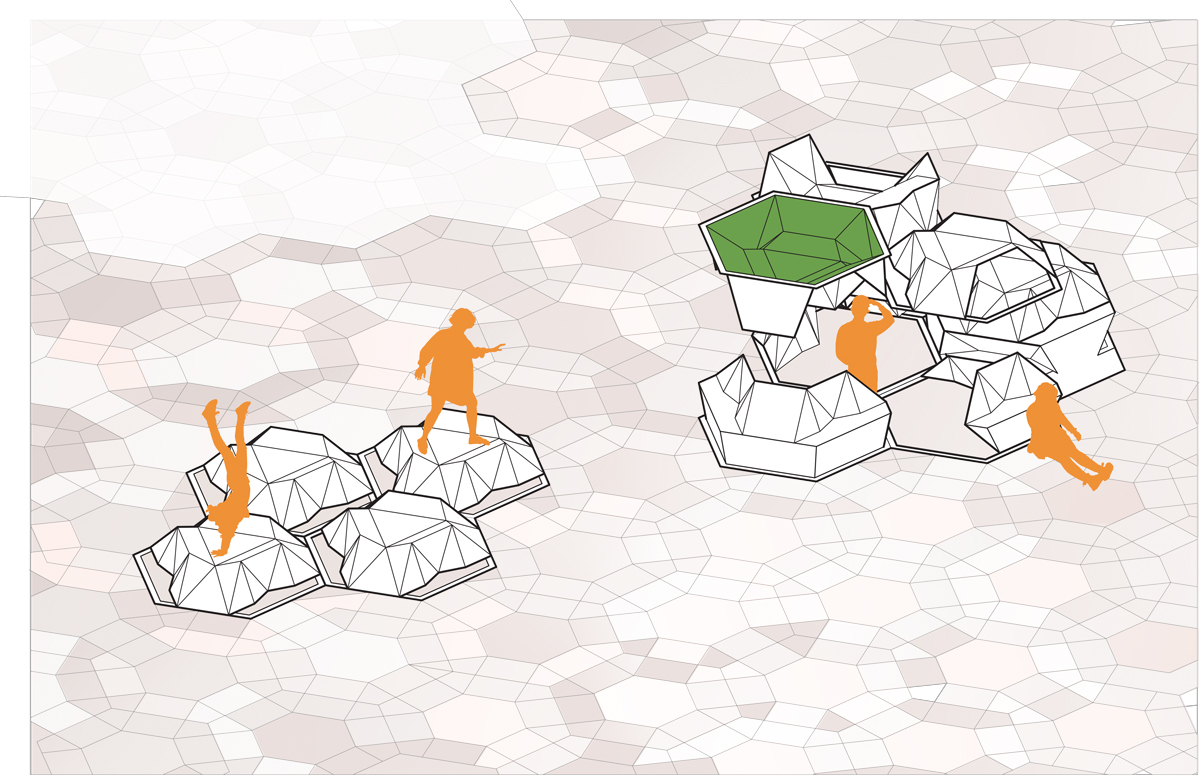 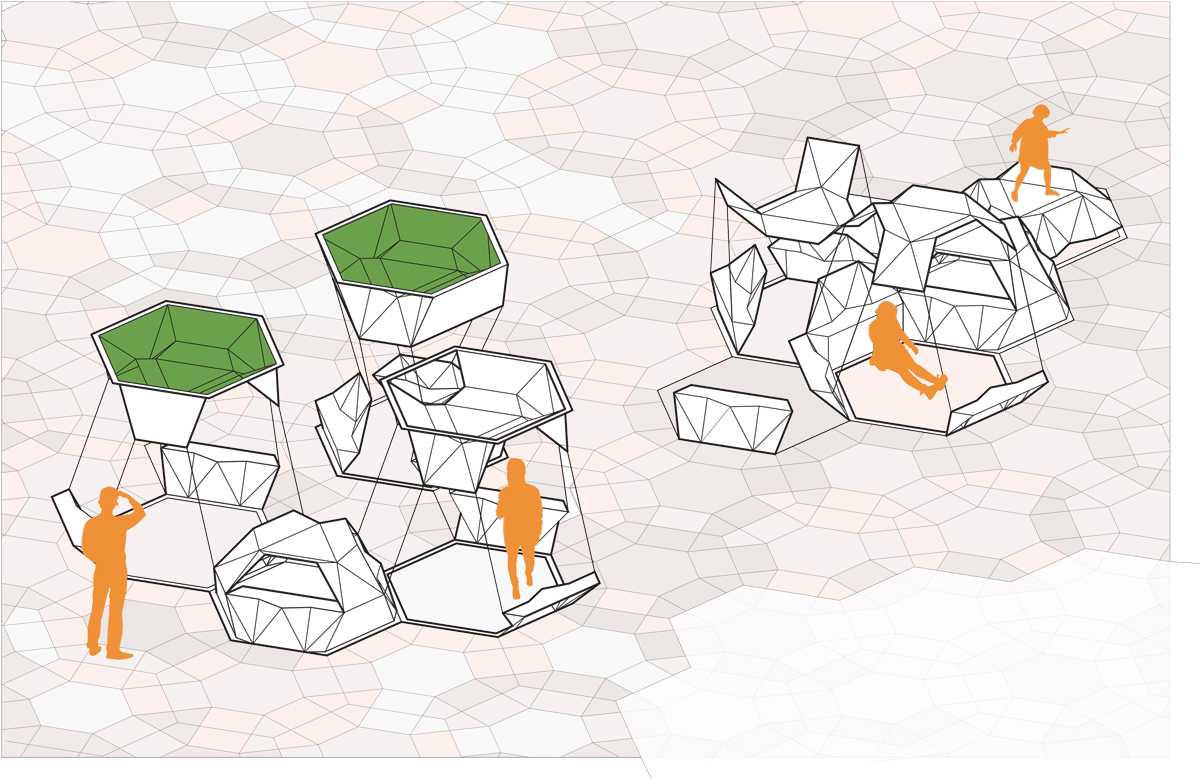 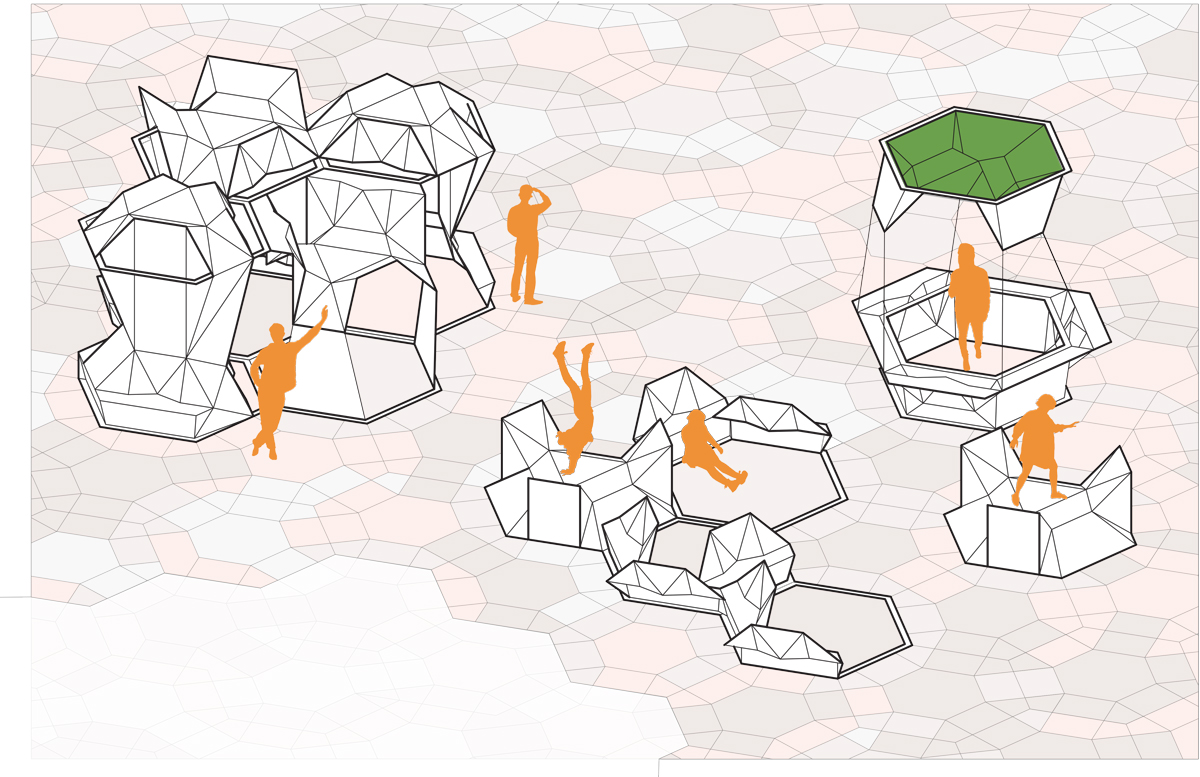 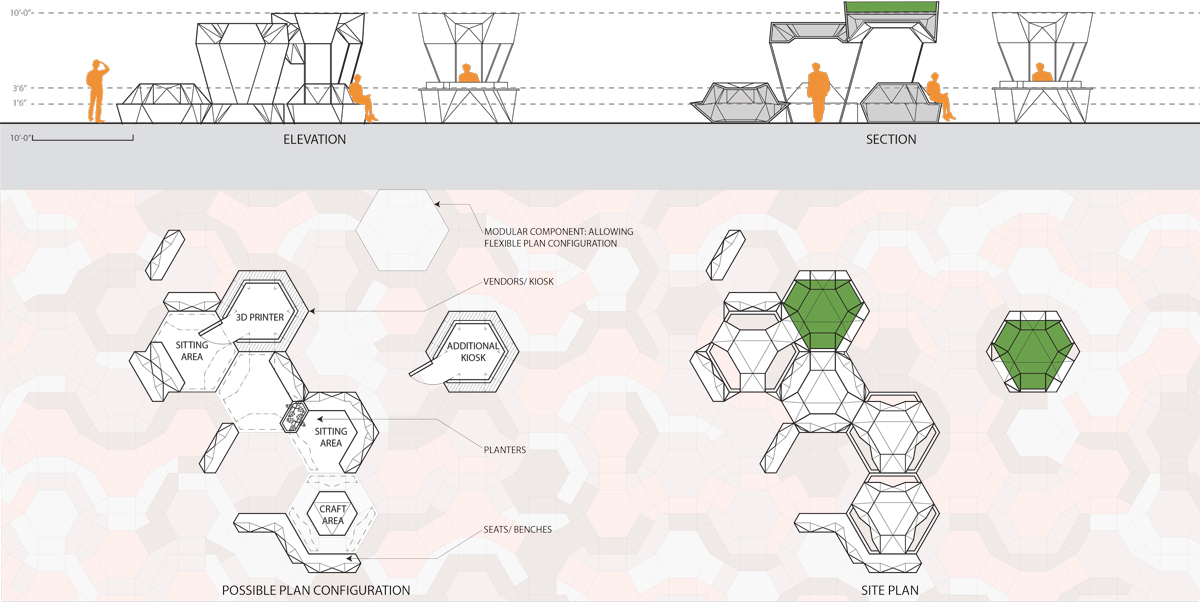 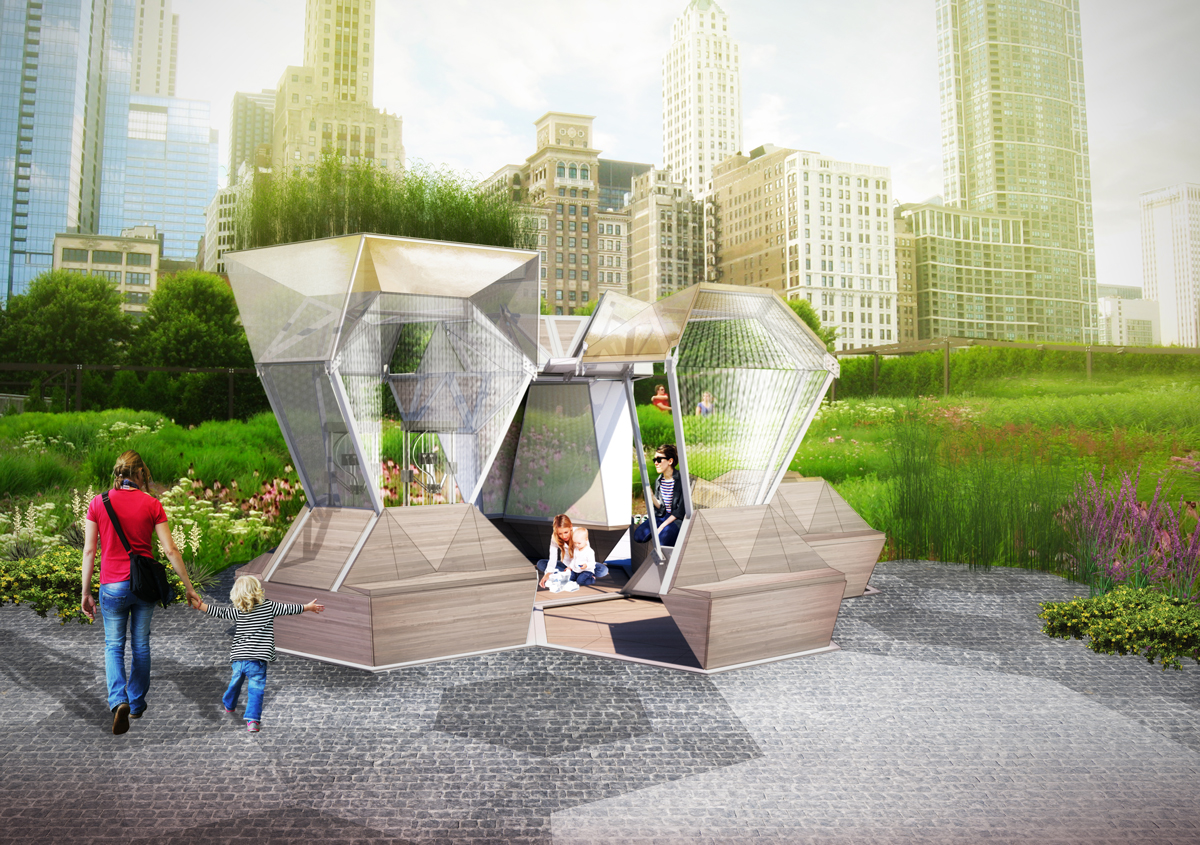 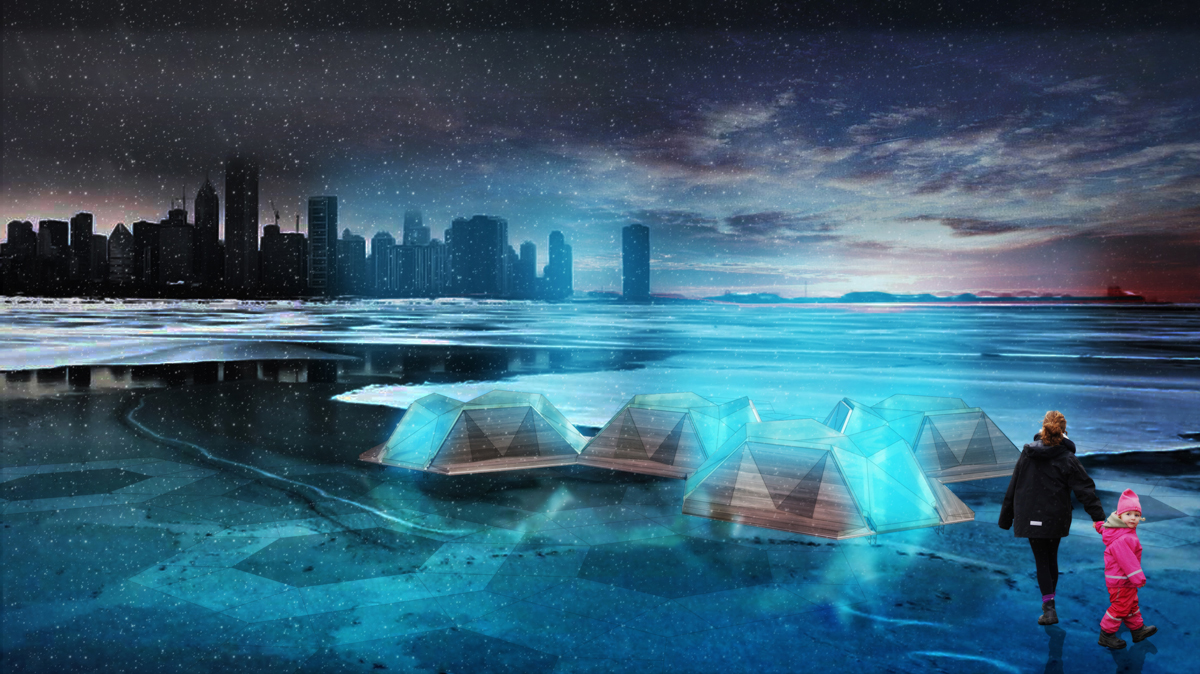 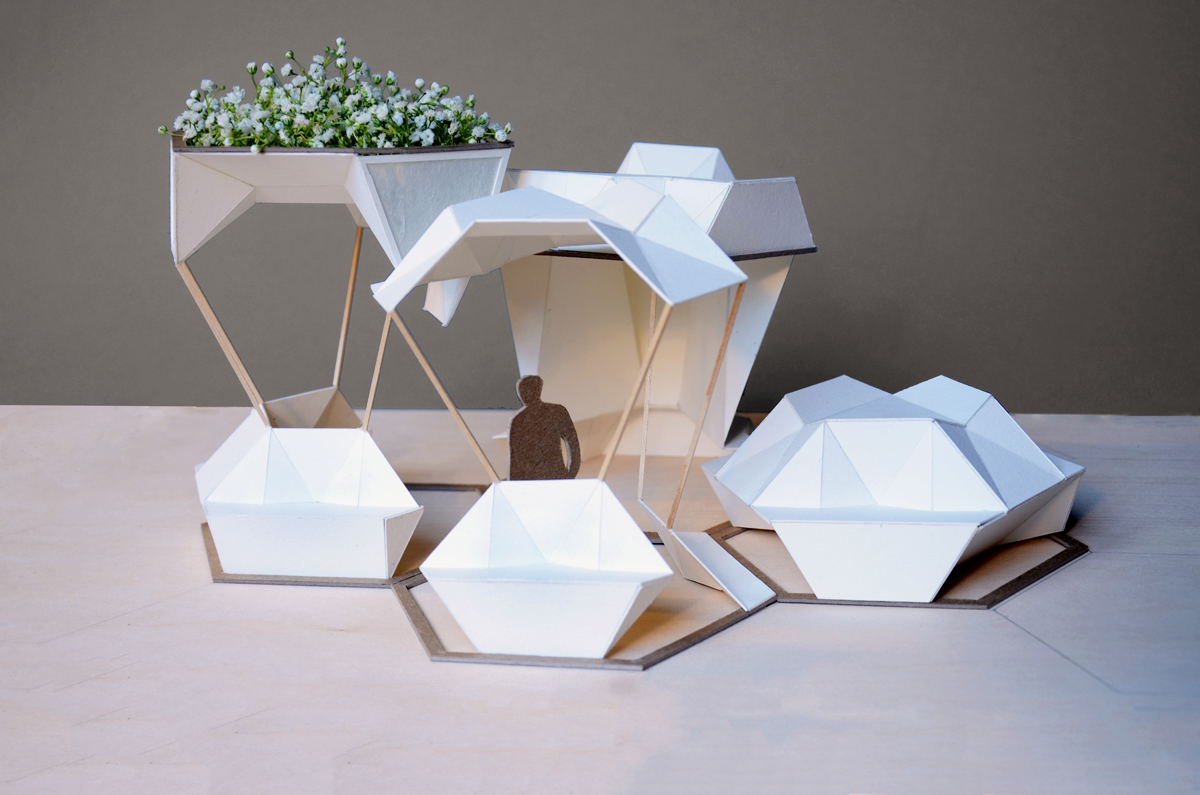 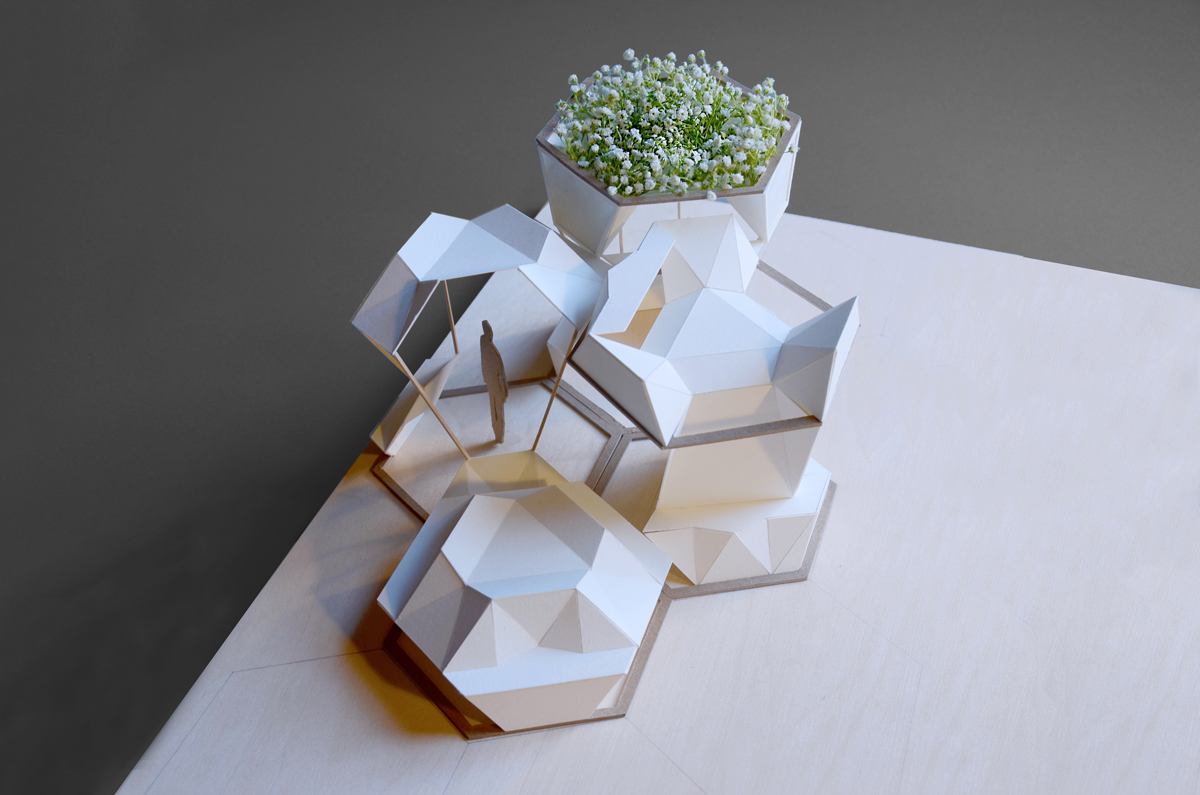